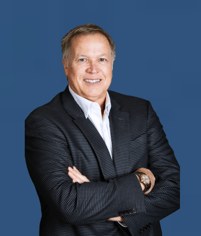 Michael Keene, son of founder, Robert A. Keene, started at The John Roberts Company in June of 1969.

Michael worked at The John Roberts Company while pursuing his BFA Degree at The University of Minnesota where he studied painting, drawing and filmmaking (the flower image above is one of Michael's paintings). From maintenance to receiving, bindery and prepress, Michael was fortunate to spend time in every department before being named President in 1986. Today Michael is the CEO and Chairman of The John Roberts Company.

Michael is passionate about giving back to the Graphic Arts Industry and has been involved in both local and national printing associations. Michael has received The PIM Executive of the Year Award, Harry Quadracci Vision Award, Lewis Memorial Award and has served as a member of the Ben Franklin Society, Web Offset Society and former Chairman of PIA, to name a few.

It is still all about “wowing” his customers. Either by product or service, Michael continues to find a lot of joy and satisfaction in customers counting on us to help them grow their business.

Travel, barefoot waterskiing, motorcycle riding, painting, snow skiing, weight training, reading and yoga are just a few of the ways that Michael likes to enjoy his down time. Michael lost his son Koan to ALS in 2016. He is very proud of his daughter, Marnie, who is now President of The John Roberts Company. Michael enjoys spending time with his wife Ann Marie, his four grandchildren, two great-grandchildren, step-daughter, daughter and a really nice dog named Harvey.